I just want to let you readers know that I am not completely satisfied with this post.  However, I felt like I could not do anymore to it, so I decided to publish this anyway.  ETA:  I cleaned this up a little.

Out of all the ones have I seen so far, I probably enjoyed this movie the most.  When watching, I felt real exhilaration and enjoyment.  In short, Goya’s Ghosts makes for an epic, semi-fictional tale of Francisco Goya (Stellan Skarsgaard)  and Ines Bilbatua (Natalie Portman), his muse, and Spain, an embattled country.

Charles IV and his Family

At the start of the film, Goya himself worked as a court painter for King Charles IV (seen above).  Regarding Randy Quaid, the actor who plays King Charles, he looked so much like him, it felt uncanny.   Furthermore, this counts as a second biopic involving the Spanish artist, the first known as Goya in Bordeaux (A very good movie).  The movie revolves the main fictional character Ines Bilbatua, whose life takes a turn for the worse by Spain’s changing governments.  First, she’s imprisoned and tortured by the Inquisition based on an accusation that she practiced Judaism.  While in prison, the priest Lorenzo (Javier Bardem) rapes her.  In Napoleon-controlled Spain, she ends up mentally unstable thanks to her imprisonment and torture.  To makes things worse, she has a child who later becomes a prostitute.  Kudos to Natalie Portman for bringing this tragic role to life.  To the end, the movie had me gripped and devastated by her downwards spiral.  In a way, Ines represents the people of Spain.  A victim of people who abuse their power.

The priest Lorenzo himself first has power thanks to the Inquisition.  However, Ines’s family takes revenge on him, and he escapes Spain.  After Napoleon takes over Spain, Lorenzo regains power not as a priest, but as he calls it, a “man of reason,”  He collects art from people such as Hieronymus Bosch.  However, when the British Empire takes over and reinstates everyone, they execute Lorenzo in a show for an angry public.  The last scene of this movie ends with Ines, the priest, and their daughter all together in a twisted family reunion. The daughter, now with a British officer, and Ines follows Lorenzo’s corpse.

However, this story does not just revolve about Goya and Ines.  This movie revolves about Spain itself and the constant violent changes the country dealt with.  First begins with the Church bringing back the Inquisition, then the heyday of Spanish Royalty ending, then Napoleon’s forces taking Spain and finally, it ends with the British Empire reinstating everything.  Throughout this movie, these changing governments stomp on the people of Spain.  Although the torture scene happen and people have commented on how it reflected the Abu Ghraib photos, these scenes come and go immediately because of Spain’s constantly changing governments.  In other words, the Inquisition represented only the first of Spain’s many horrible events.  While he has his name in the title, Goya acts as an ensemble character who records the horrors around him. 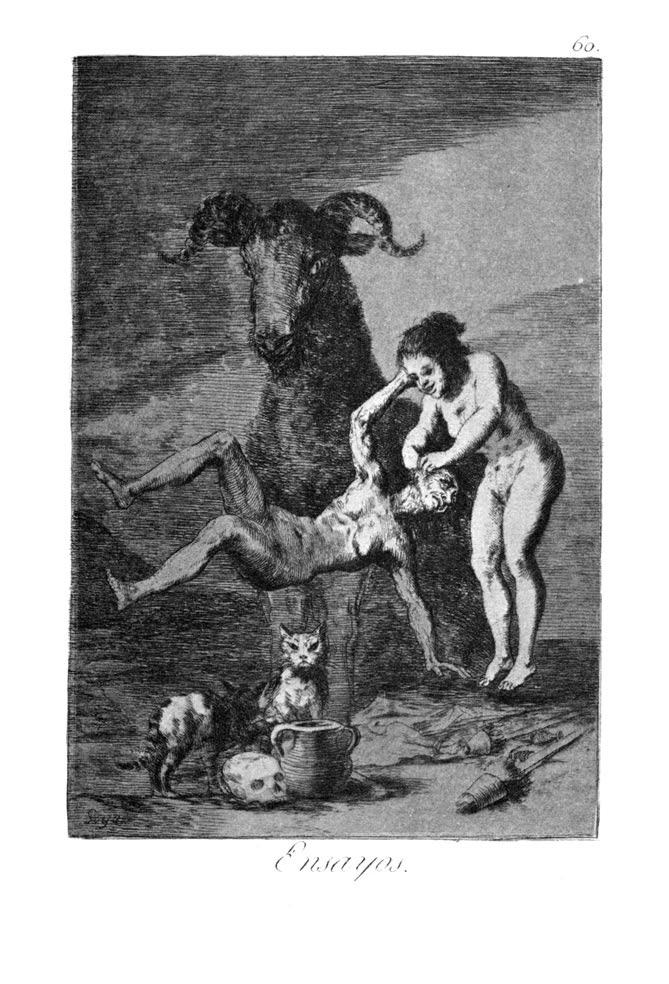 The movie’s message sums itself up with this: that no matter what kind of change that people in power offer, the commoners still end up receiving punishment.  We see this with the Inquisition who promises back religion and instead, they bring torture and tear families apart.  According to Jeanine Baticle’s Goya: A Painter of Terrible Splendor, Goya did have a concern for the people who suffered at the hands of corrupt governments (1).  The most obvious examples of this came from Los Caprichos.

We see this with Napoleon as emperor who promises to bring reason and rationality to the Spanish court oppressed people, but his soldiers still take advantage of the people.  It does not improve when the British reinstate the Church authorities.   Ideologies change, but if one does not have morals, change will not matter.  People still remain the same monster they started out earlier.  Despite this movie’s main plot about Francisco Goya, the movie itself does not have an “artsy” feel but instead focuses on the historical drama at hand.  We do see Goya’s etchings and him at work.  However, the last scene where they execute Brother Lorenzo, the film references to scene 23 from Los Caprichos.

While the gruesome spectacle happens, Goya stands in the crowd sketching.

This film did have some inaccuracies.  For instance, the scene where Goya shows Queen Maria Louisa the Equestrian portrait, the movie says that she hated it.  However, in the book, Goya: A Painter of Terrible Splendor by Jeanine Baticle,  the queen actually liked it (2).  Plus, Goya’s own family does not show up at all in this film.  I guess Goya’s family had did not fit in the grand plot that the screenwriters and director had in mind.  Finally, I do not know whether to give the writers and director credit or puzzlement for not including a reference to The Third of May, 1808 painting.  A painting that recorded Napoleon’s troops killing Spanish civilians.

While writing this, I discovered these reviews that agreed with me.

http://cinemadave.livejournal.com/197184.html  He makes the same observations.

Goya Movies They have more information about the movie and its goings-on.  However, they do not talk about Goya in Bordeaux.

Established Artist: During this time, Goya painted for the Spanish Court.

Art Reenactments:  During the scene of Spain under siege, the movie references Goya’s Los Caprichos.

Artist At Work: Throughout the movie, we see Goya painting and sketching scenes and people.